The Trip of a Lifetime - Part 1

﻿
Never in my wildest imaginings did I ever come close to how incredibly amazing our trip to England would be. Even sacked with massive jet lag and a grueling wait through customs at Heathrow, Dad and I were thrilled to find Hannah waving at us as we finally emerged through the gate. Oh, what a heavenly hug to finally wrap my arms around our beautiful daughter who’s been traveling Europe all summer! With her, at long last we met Aaron Bradshaw, her back-packing buddy, and … Steve Kirk! Steve, along with his wife Lydia and their three kids, would be our hosts in Parham for the next four days.

I must confess to more than a few goose bumps as Steve turned into their property which housed the 390th some seventy years ago. Spotting that control tower – the same one Dad flew over on so many missions – was positively surreal, like stepping back in time. I could hardly wait to visit the museum which it now houses.

Just so you know, writing may now be my profession, but I’ll never find the adequate words to express how unforgettable our visit was with Lydia and Steve and their three adorable children – Fliss, Tommy, and Betsy. They’d decorated their home both inside and out with American flags and “welcome” banners to boot! Shortly after we arrived, Lydia served us a traditional “Sunday Roast” with all the trimmings - including Yorkshire pudding. SO good. We were astounded to each have our own room in their lovely home. Can you imagine having that many guest rooms? 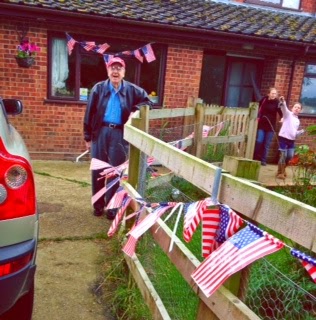 Lydia had planned a wonderful itinerary for our visit, including plenty of time at the Parham Airfield Museum located there in that historic control tower. Earlier this summer, they celebrated a grand re-opening after a large addition was built to showcase more of the 390th memorabilia. It’s a fascinating museum, and the passion of the docents who volunteer their time is contagious from the moment you enter. 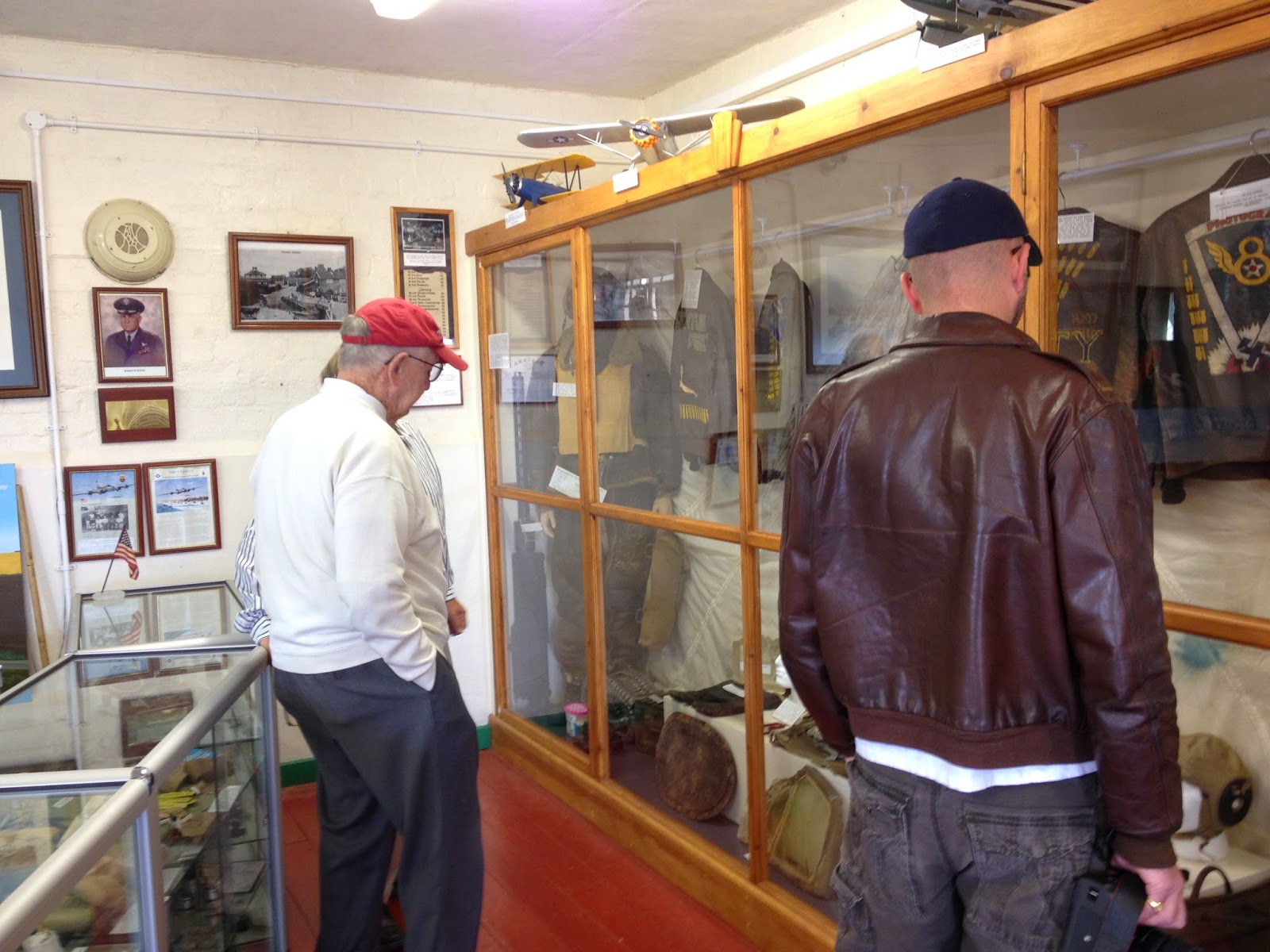 Just as I’d expected, Dad was quite the rock star once he set foot in that historic building. Visitors clung to him like Velcro, asking questions, wanting his autograph, and having pictures taken with him. Meeting Lydia’s father Peter Kindred (below), who oversees the running of the museum, was such a treat. Peter is a walking, talking historian who loves sharing his knowledge about the 390th and those who served on so many acres of the family’s farmland.


Later, a reporter from the Suffolk BBC interviewed both of us, and we got to hear portions played on the radio the next day. What a joy to be able to stand back and experience all this with my father! 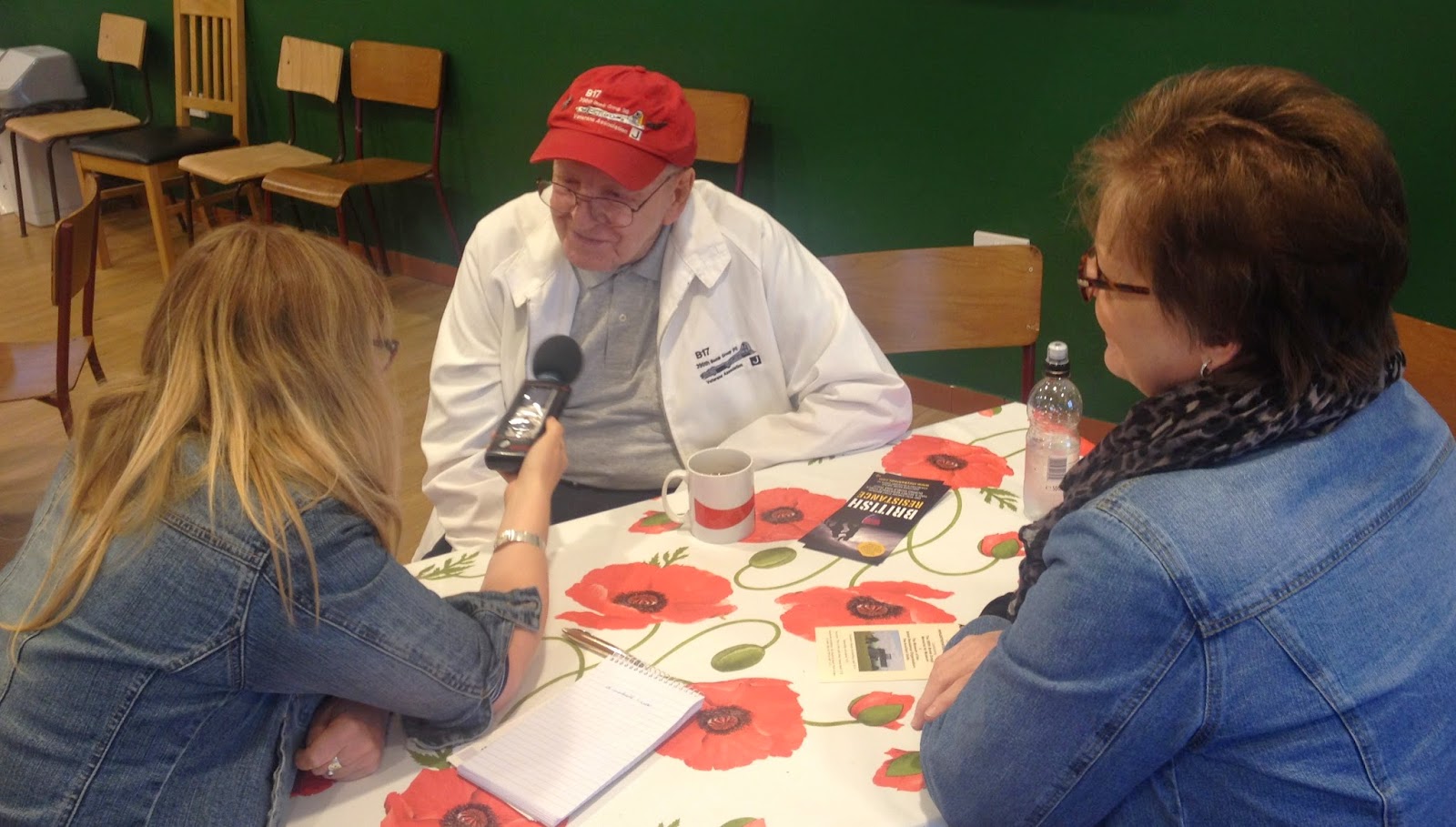 And if that wasn’t enough, they threw a belated, surprise 91st birthday party for him! Check out that cake with his picture on it! 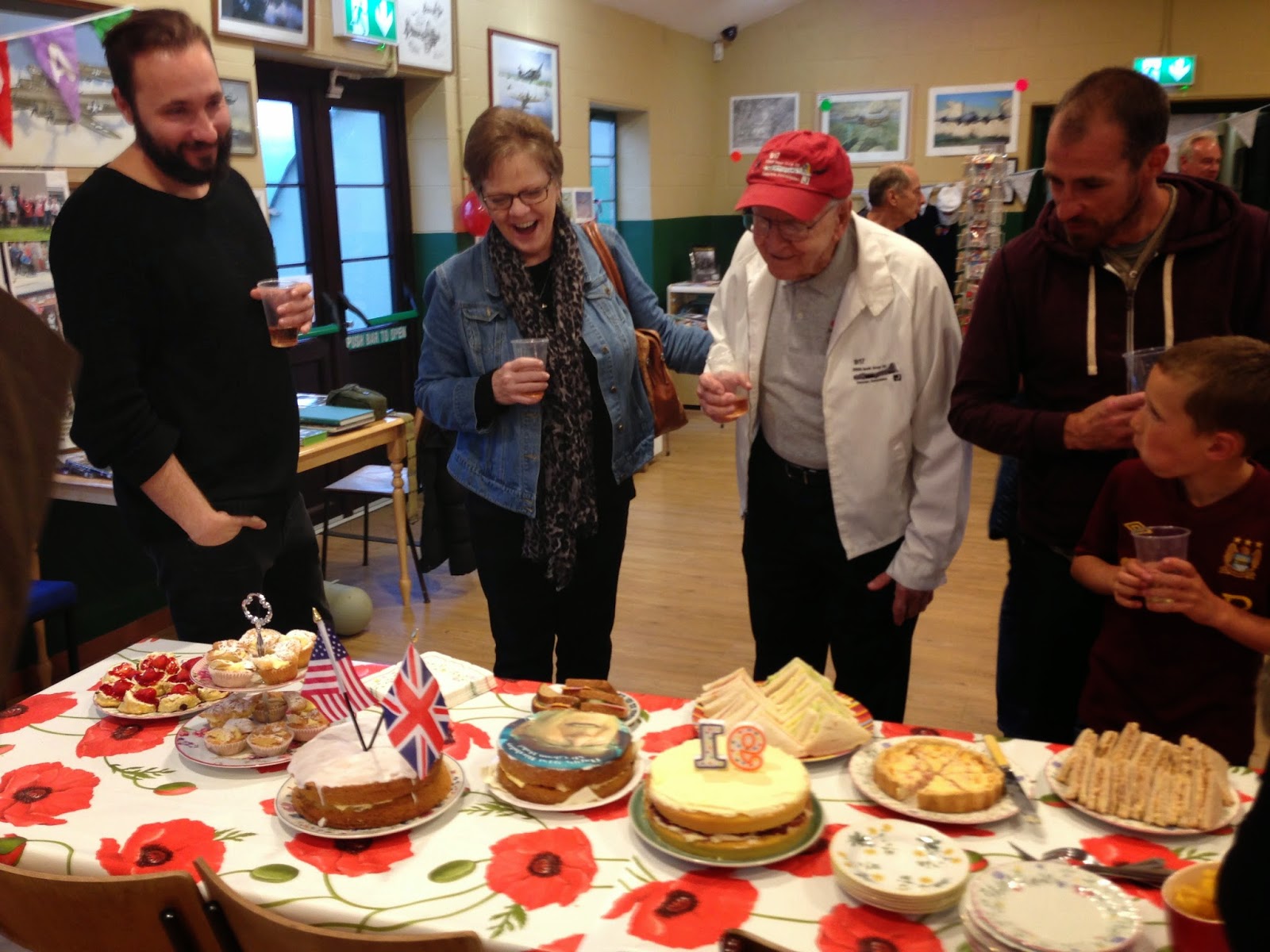 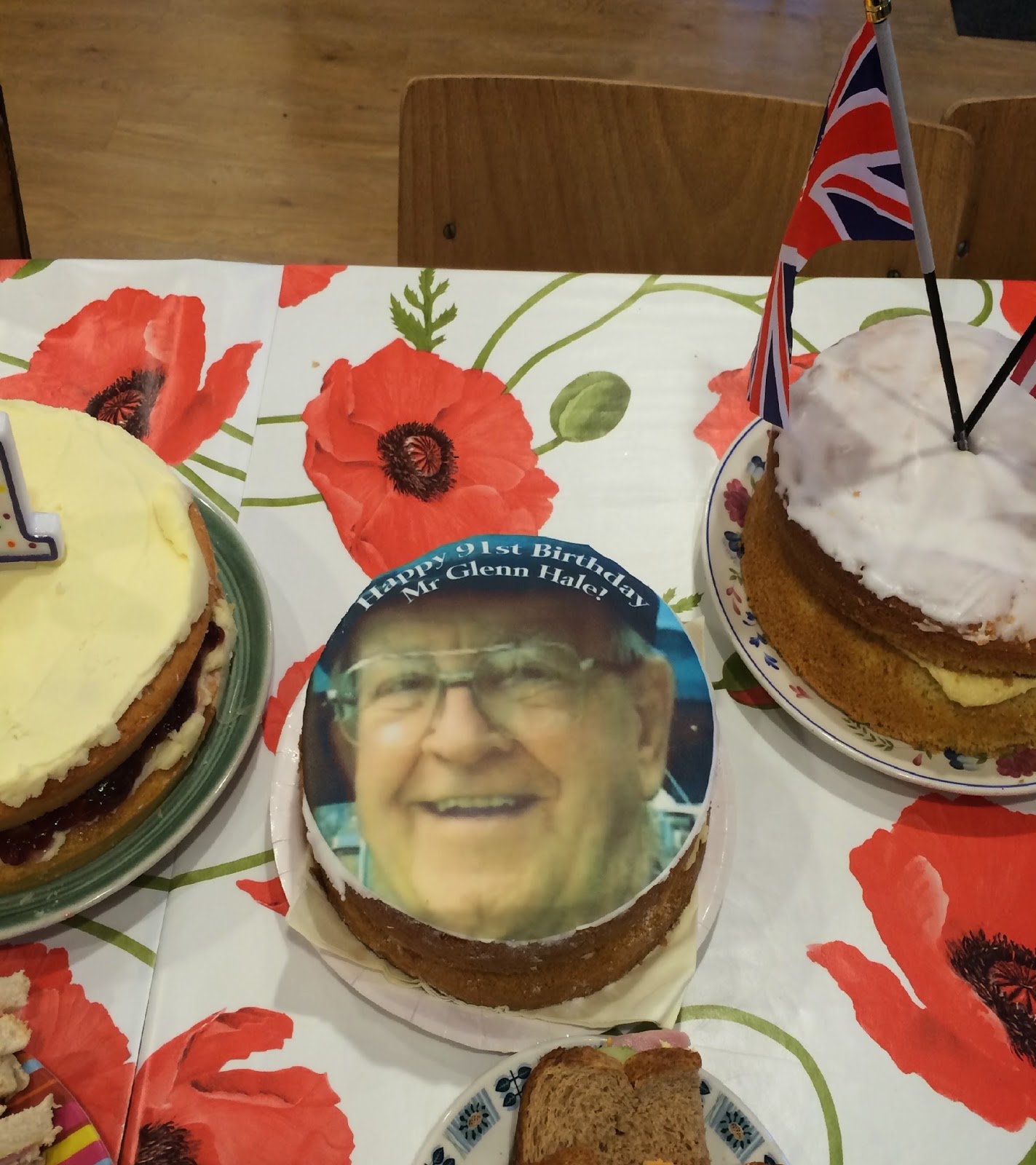 The next day we visited Framlingham Castle, the iconic 11th-century structure that was such a welcoming sight for the crews of the B-17s as they returned from missions. On a side note, Dad’s brother, my Uncle Ralph, researched our family’s genealogy several years ago and traced us back to Sir Roger Bigod, the Earl of Norfolk, who built the castle. Small world, eh?

Other stops on our itinerary included a delicious lunch at a pub called the White Horse Inn. The cozy ambience was exactly as I’d envisioned the pub where “Danny” and his friends visited in my book. It was also where we had our first taste of Sticky Toffee Pudding. Yum! 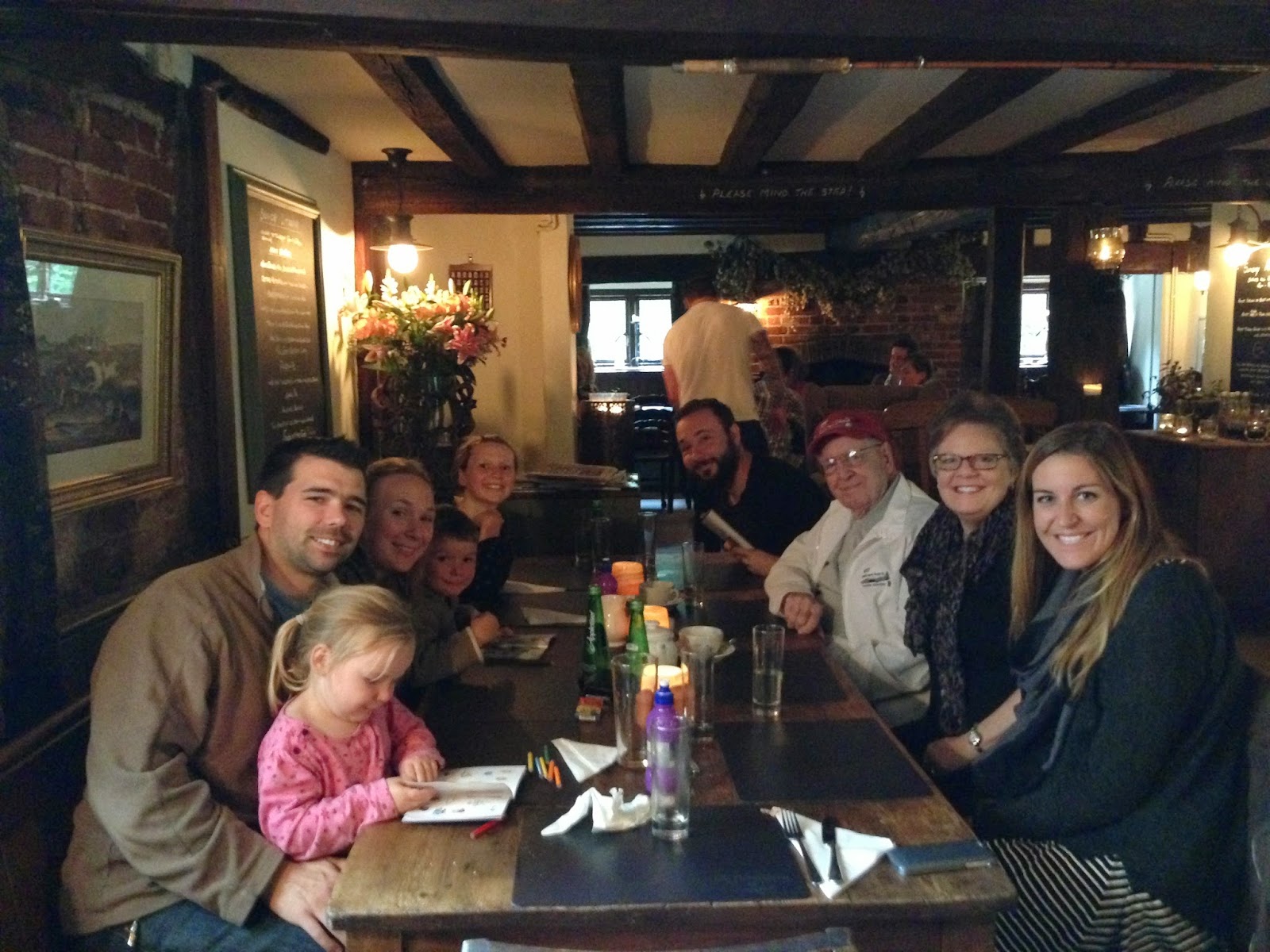 Tuesday evening we ate fish and chips in the quaint village on the North Sea called Aldeburgh (which, pronounced to our Yankee ears sounded just like Oprah, keeping us confused to say the least.) Afterward Steve and Lydia took us to see The Late Edwina Black, a “whodunit” at Aldeburgh’s summer theater. 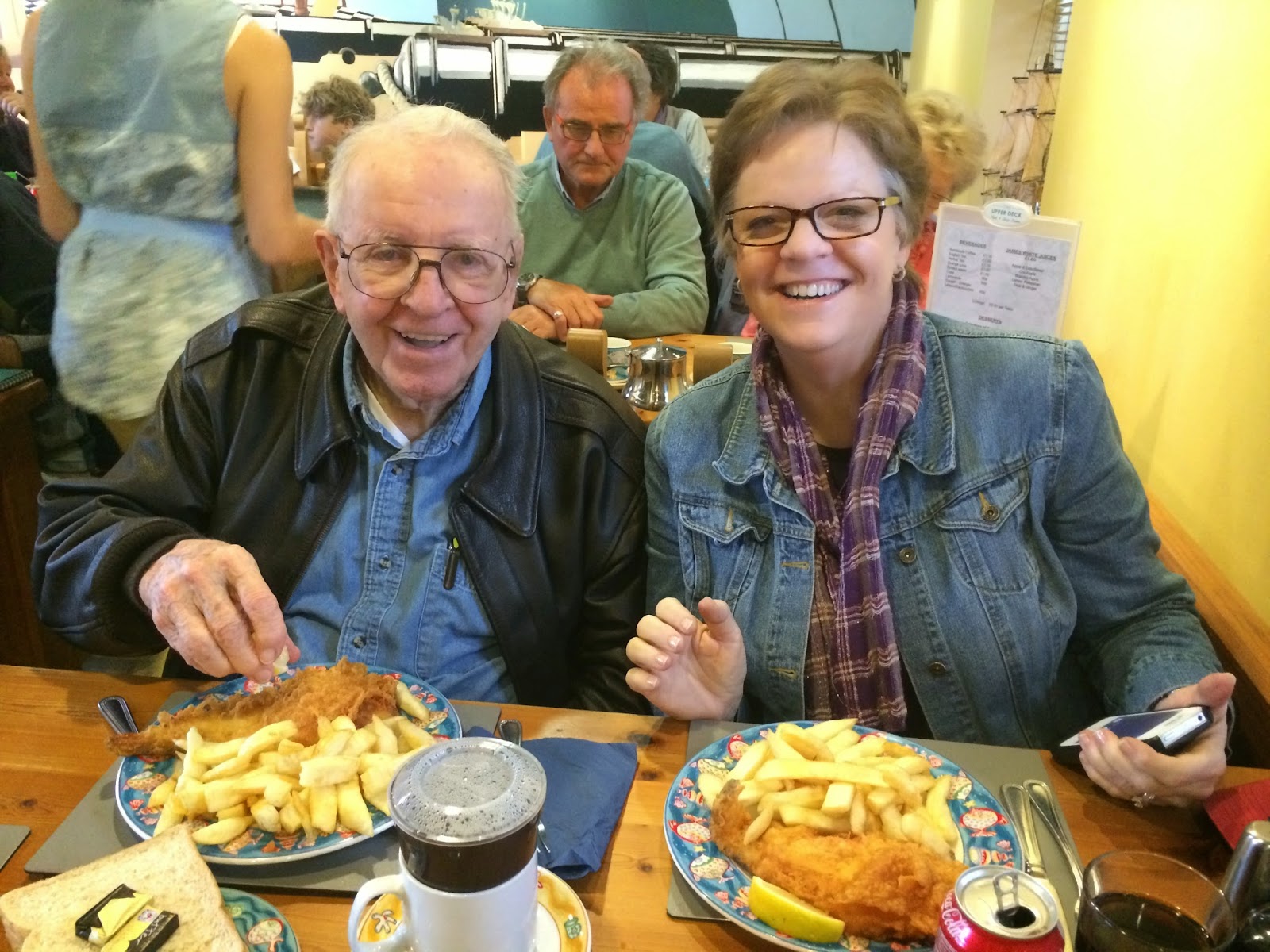 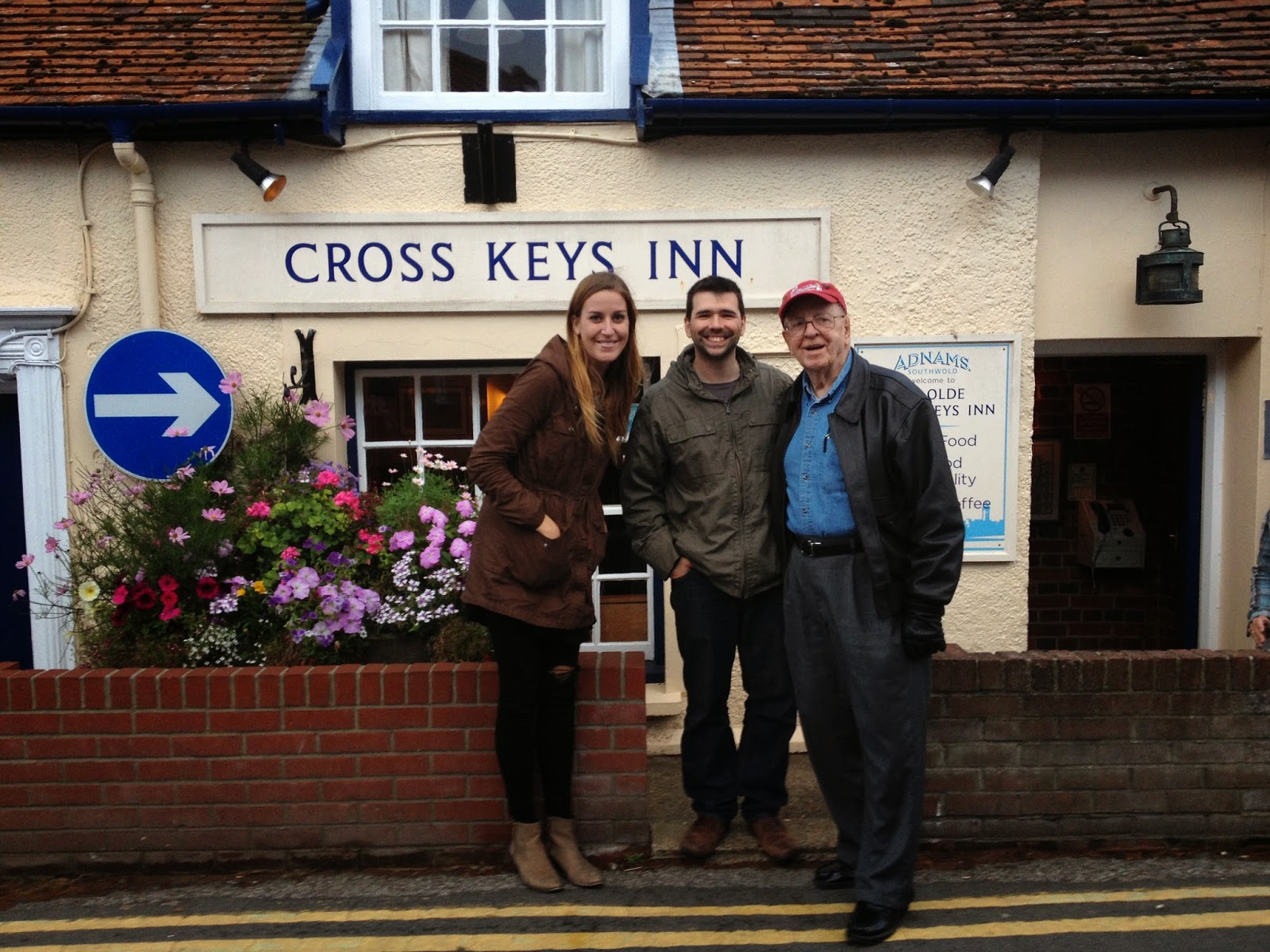 ﻿
On Wednesday, we stopped by the Framlingham Church where in 1995, on a trip here to commemorate the 50th anniversary of VE Day, Mom and Dad attended services. (No, the building isn't leaning ... apparently the photographer was!) 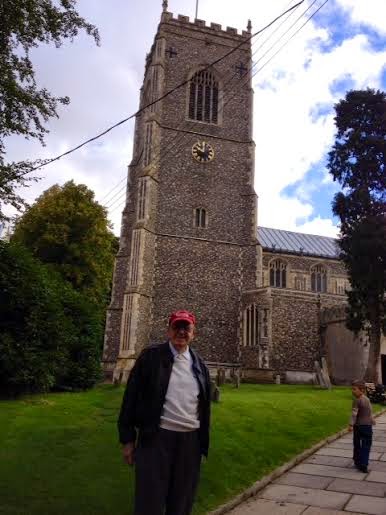 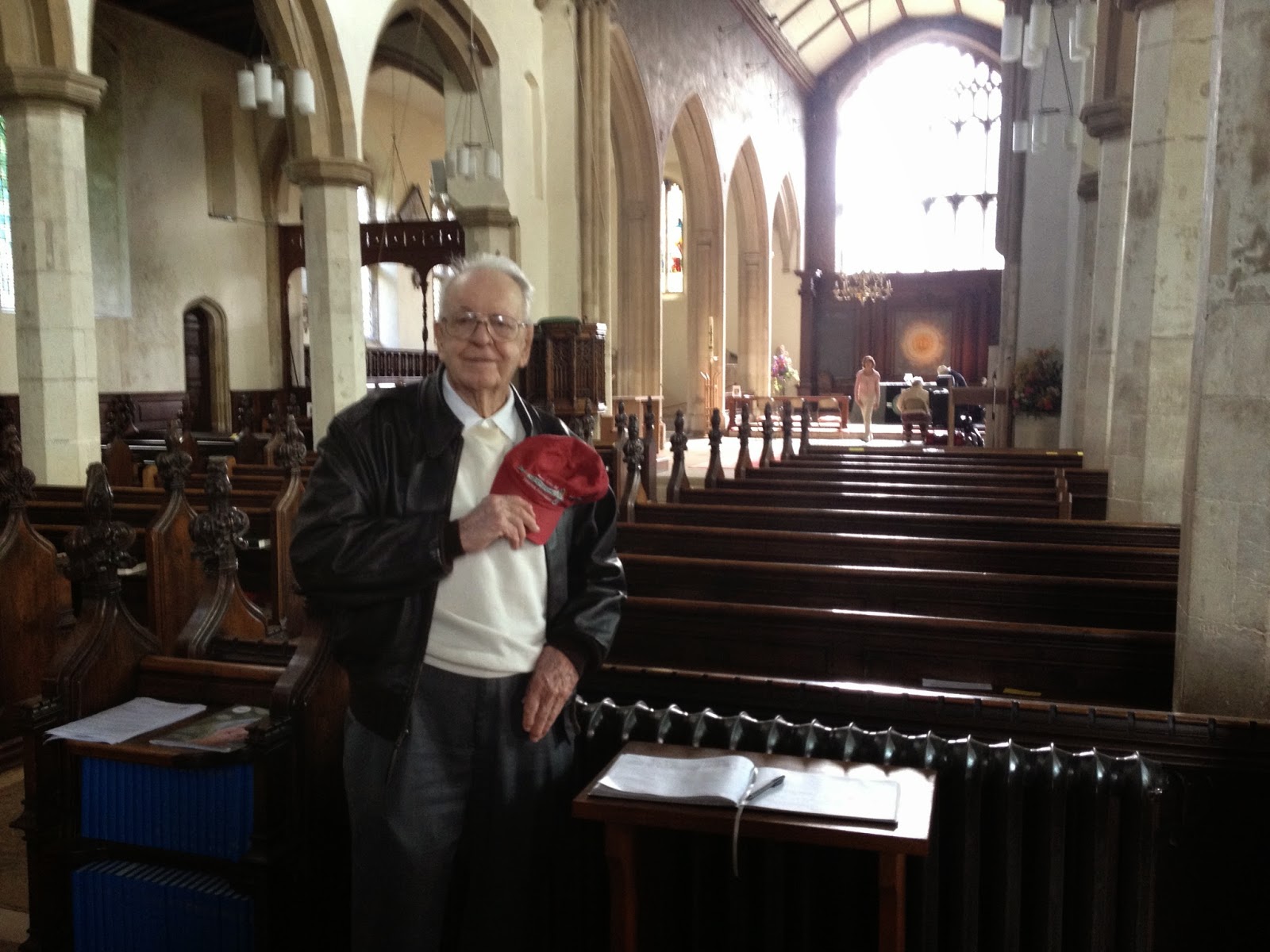 We fell in love with Framlingham! 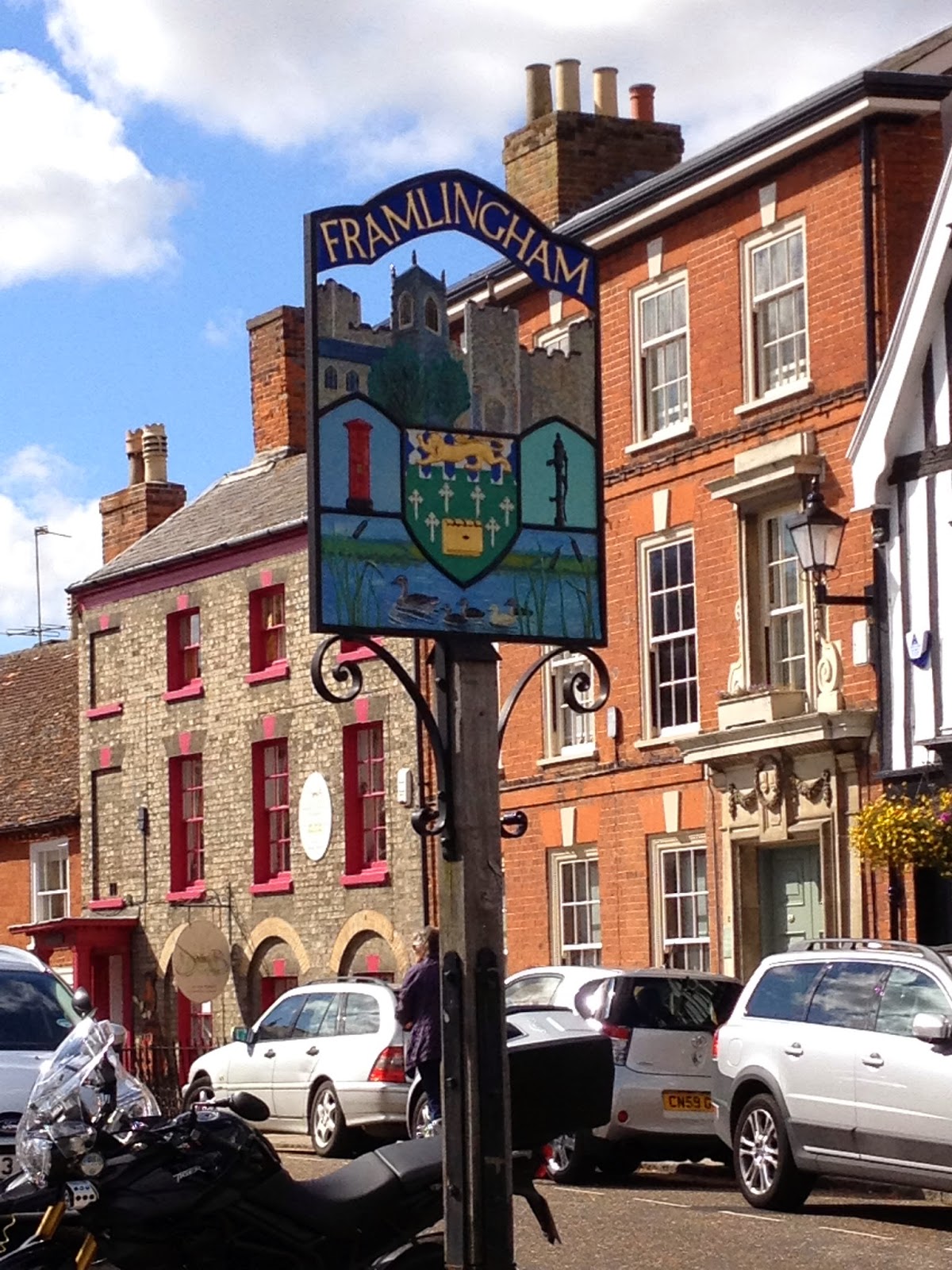 Later, Peter took Dad and me to the building which housed the 390th's chapel/movie theater. Talk about stepping back in time … 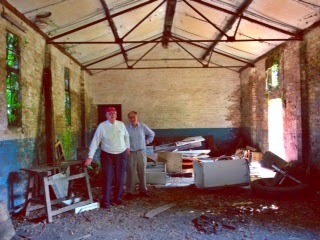 Lydia had also arranged a phone interview with a reporter from the local newspaper on our last full day there. A photographer met us at the museum for a photo shoot, and later, we had a lengthy chat with the reporter. 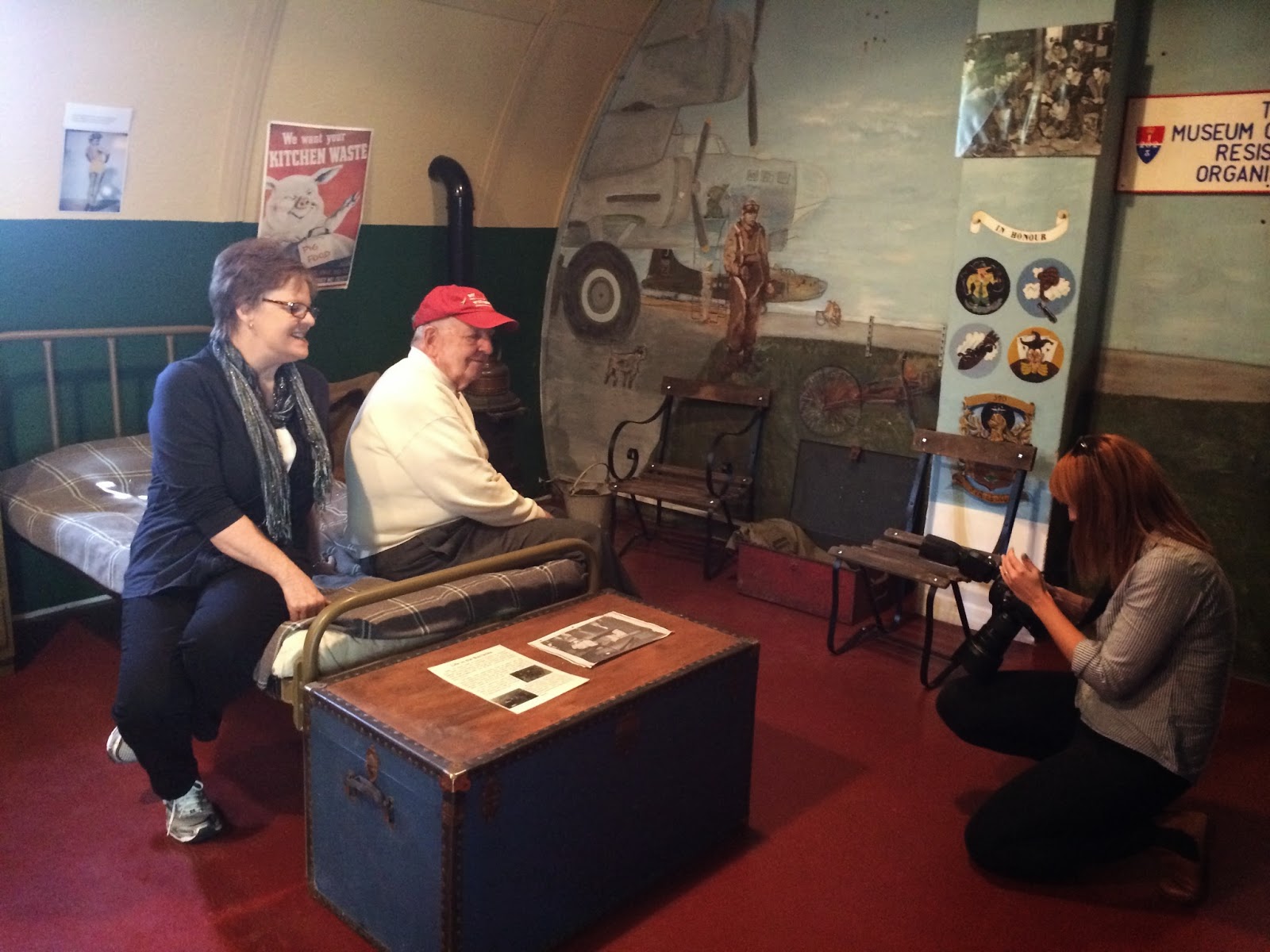 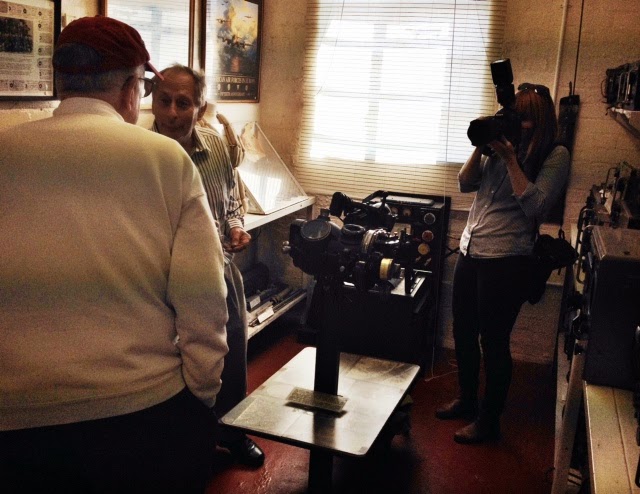 Then, on our last evening, Lydia had arranged a dinner river cruise on the Lady Florence. The weather was perfect, the captain’s running commentary was fascinating, the meal in the boat’s dining room was lots of fun, and the sunset … the perfect ending to a day of memories.
Before we left on Thursday morning, Lydia prepared a traditional English breakfast – including baked beans alongside eggs, bacon, and sausage. Fliss thought it quite odd we'd never had beans with our eggs! 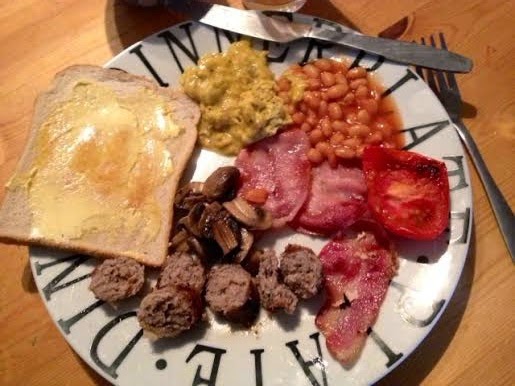 Shortly afterward we had to say our goodbyes.
Even as I’m writing this, my eyes have filled with tears of joy. Who could have imagined that two years ago I would write a novel based on Dad’s experiences during the war which would one day connect us to this family whose roots are planted in the soil that once hosted American allies who’d come to do their part in WWII. I’m so thankful that Lydia read my book and wrote to me, forever bonding our families together. Now, it's their turn to come to America, amen?!

Later that morning, we made sure Dad was taken care of for his flight back home. Afterward, Hannah, Aaron, and I checked in at a beautiful rental home in London where we stayed for three more days to see the sights. More on that next time.


Of course, I’ve only skimmed the surface here, sharing highlights of our visit, but thanks for letting me share them. I had a feeling this would be “the trip of a lifetime” – and oh my goodness, was it ever!
Posted by Diane Moody at 11:38 AM