I wish someone had told me that when I was young. "Diane, life can get messy sometimes. People can be weird. Situations can get ugly. Learn to deal with it." Chances are, if someone had tried, I would have scrunched up my face, gave them a confused "huh?" and gone on my merry way. When you're eight or ten or twelve, who cares about that stuff! Unfortunately, it's one of those life lessons you have to learn as you go.

Fast forward to mid-life and around every corner there seems to be a mess. Big ones. Little ones. Ones you can avoid fairly easy. Those you can't no matter how hard you try. 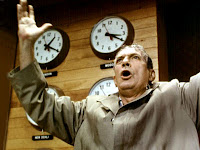 Lately, I seem to step into these messes every time I turn around, and the insuing stench of what I've stepped in as it hits the fan lingers for days and weeks and months. I feel like I'm trying to give birth to an ulcer and my headaches are constant. Why is that? And why can't I seem to just blow them off like I used to? Perhaps it's maturity finally seeping into my bones. Then again, maybe it's the opposite. Maybe I'm to the point in my life when, like that great line from the movie Network, "I'm mad as hell and I'm not gonna take it anymore!" I'm tired of slithering away from conflict simply because I despise confrontation!

Don't get me wrong. I truly, truly despise conflict and confrontation. It's not in my nature to enjoy the fight and constant contention. Not at all. But I'm smart enough to know it's unavoidable unless you live in a secluded cabin in the Rockies somewhere, cut off from all civilization. Which, for the record, appeals to me more and more every day now.

With even the best of friends comes conflict. It's inevitable. But it's what to do about it that gets totally weird sometimes. "Can't we just agree to disagree?" Yeah, that's the ticket! Sometimes I feel like branding those six words on my forehead. Because even amongst those dearest of friends or family, we won't always agree on every subject in the universe. And isn't that okay? 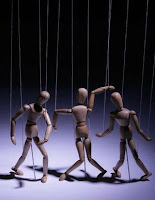 Yet as I get older and perhaps crankier with each passing year, I'm just tired of having to cave on certain subjects. If someone's trying to manipulate me or take advantage of me, I'm not as willing to just lie down and take it anymore. I am SO over letting people walk all over me for the sake of keeping the peace. According to personality surveys I've taken over the years, I'm a sanguine. That means I want us all to get along! But my sanguinity (yes, I made that up) is worn out and weary after years of abuse. 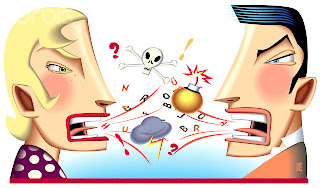 Unfortunately, I don't have much experience in handling these situations, so I either (a) get tongue-tied and flustered, totally incapable of expressing myself; or (b) explode in a rash of unkind, often sarcastic barbs that I later regret and must apologize for.

What about that whole "turn the other cheek" concept taught to us in scripture? I did some research on that very subject and learned that the reference has more to do with accepting an insult (offering your other cheek for a backhanded slap) than merely taking abuse. The verse in Matthew 5:39 reads, "But I tell you, do not resist an evil person. If someone strikes you on the right cheek, turn to him the other also." Picture that. If someone slaps you on the right cheek, the only way he/she can slap you on the other cheek would be to backhand you, which represents an insult. Its intention is to humiliate, shame or belittle. And Jesus wanted to teach us that our dignity comes not from others but from Him. Hitting back only lowers you to the offender's level.

But that doesn't mean you can't stand up for what you know is right. In my case, I'm realizing I need to learn how to do that better without letting my emotions carry me away. State my case, stand firm, but not go on the attack because I've been taken advantage of or challenged. When someone tries to manipulate me, I need to keep my cool, let them know I will not cave to their manipulations, and move on. It's not always easy, but I'm learning.
What about you? How do you handle life's messes? How do you handle those who willingly create conflict and confrontation in your life?
Posted by Diane Moody at 9:01 AM 2 comments: