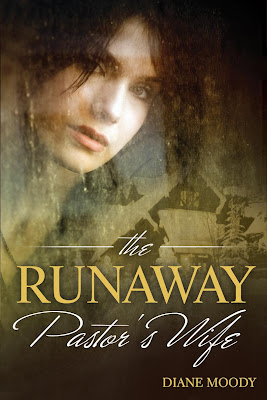 No, that's not a news flash for a missing person (thankfully!) It's the official announcement of the Kindle release of my debut novel, The Runaway Pastor's Wife. I am so excited to finally have this book in print! My, what a history it's had. Let me tell you about it.

Once upon a time, I - Diane Hale Moody - was a pastor's wife. It's true. I helped put Ken through seminary right after we got married. Those were wonderful years and we made so many good friends - most of them young couples like us just starting out. After graduation, Ken was called as minister of education to his first church - First Baptist, Naples, Florida. Paradise indeed! We stayed there about five years, had both our children while on staff there, then moved to First Baptist Church of Indian Rocks in Largo, Florida in 1989. We were there just shy of nine years. As in Naples, we made so many forever-friends there and made some fantastic memories while Ken served on that mega-church staff.

But if I'm honest, I really started struggling about half-way through those years at Indian Rocks. Part of it was my glorious "adventure" into pre-menopause. (Waaaaaay too early, I might add, baffling even my good doctors.) But it was more than that. I won't bore you with the details, but suffice it to say, I wasn't handling the role of "pastor's wife" too well. There were times it got pretty ugly. When I say the families of those in church ministry live in a fishbowl, I'm being kind. It's tough. Sometimes, brutal. It's hard on the kids, on the marriage, on the entire family, and of course, on the minister-husband. Some handle it with grace and ease and they are my heroes.

But I wasn't one of those. Eventually I ended up seeing a Christian counselor. Terry knew I loved to write, so he suggested I pour some of my angst and depression and frustration into a story. Before my fingers even hit the keyboard, I knew what that story would be about: a pastor's wife who runs away from home! Fantasy and then some, oh my yes. While I am NOT my main character, Annie - let's be perfectly clear on that - I certainly understood her struggles. Her story is entirely fictional - trust me on that - though there are characters and scenes and situations that tip-toe very close to real life at times. And that's all I'm gonna say about that.
Therapeutic? Oh baby. You have no idea! A thousand counseling sessions couldn't have done what writing this book did for my soul.
That was fifteen years ago. Annie's story has gone through many revisions but of all the books I've written, this one is my favorite. That's why I'm so excited it's FINALLY in print!
You can download the Kindle version of The Runaway Pastor's Wife now by clicking here. Or, if you prefer, the paperback version releases March 1st. Not to worry - I'll remind you! After doing such a fantastic job designing the cover of my first book, Confessions of a Prayer Slacker, I was thrilled to have the opportunity for my daughter Hannah to work her magic on the cover of my first novel as well. I couldn't be more proud of her!

Just so you know, this isn't just a chick story, guys. Yes, there's romance, but there's also major league baseball, political intrigue, mystery, assassination  - well, you get my drift. So don't let the title scare you away. Just sayin' . . .

It's a little like putting my precious baby out for everyone to examine . . . but I'm so pleased to finally share this story. If you happen to read it, please drop me a note and let me know what you think, okay?

Happy reading!
Posted by Diane Moody at 3:50 AM 11 comments: