Not that you'd missed me or anything . . . but I've been on the road! And you should be warned: I passed the State of Exhaustion about three weeks ago and haven't recovered yet. So if I sound a wee bit incoherent, chalk it up to utter fatigue. This may be a long one, so feel free to grab a cup of coffee and catch up with me!


I've learned a lot about myself these last few weeks. For starters, I've always thought I loved to travel. I've been to some wonderful places over the years - Israel, Rome, the Bahamas, Alaska, Canada, San Francisco, New York City, Washington, D.C. - and I have a long list of many more destinations I'd like to venture to. But right now I'm wondering about all that. Turns out I'm apparently a home-body! And being gone for long stretches of time absolutely wears me out. 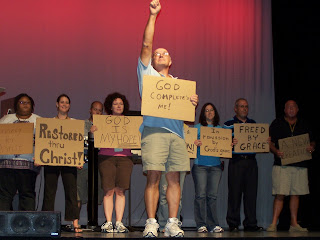 Beginning the first week of September, I took a road trip with my sister to Ridgecrest, a Southern Baptist retreat center in North Carolina. She helped lead the annual Labor Day Singles Event. No, she's not single - in fact her 30th wedding anniversary fell on the day we were heading back to Nashville! But one of the many hats she wears as a retiree from LifeWay Church Resources is  leading this event for singles. I helped Morlee behind the scenes and in the process got to meet so many wonderful singles. They had a blast! They did the coolest poster testimony I've ever seen (see photo above) and even had a square dance one night and a line dance the next. These folks know how to have FUN. I also did a book-signing while I was there through the LifeWay Bookstore on campus. I'll save my comments about that for another blog. (*Bites tongue*) 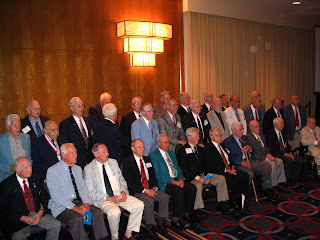 A couple weeks after we returned, Morlee & I joined our father for a trip to Norfolk, Virginia, for his annual 390th Bomb Group Reunion. This was my second time to meet with these wonderful veterans and their families (I missed last year's gathering here in Nashville after contracting a nasty case of swine flu). This year's event only rounded up 35 vets, where only a few years ago there were well over 100. But for all who attended it was a terrific weekend, and Morlee & I always love sharing these reunions with Dad (he's the handsome one in the dark jacket on the back row just below the light). 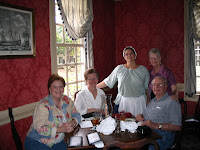 When the reunion ended on Sunday, we hopped in our rental van and drove three hours north to Washington, D.C. with a stop in Historic Williamsburg for lunch at the King's Arm Tavern. Back in 1983 our extended family spent the Christmas holidays in this wonderful village, and it was such a treat to spend a few hours there again. Peanut butter soup. Yum! 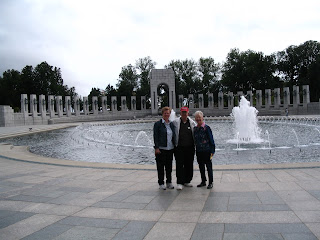 The next day in Washington, we spent one whole day touring the fabulous
"Newseum." If you haven't seen it, go! Then, my daughter's mother-in-law (and my dear friend!) Barbara Bouton, who lives in the area, drove us over to the World War II Memorial, which was the focus of our visit. Along with Dad and our precious friend Iris Taggart, the widow of one of Dad's 390th buddies, we were struck by the deep emotion that surrounds that sacred memorial. How tremendous that our country finally saw fit to honor our WWII vets with such a moving tribute! Later Barbara took us to Chadwick's, a delightful restaurant right on the Potomac, for a delicious dinner before we headed back to our hotel to crash! 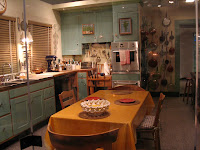 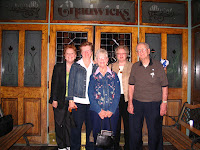 The following day we toured the American History Museum, part of the Smithsonian, which was fascinating. Get a load of Julia Child's kitchen (above left)! How fun is that?! But oh to be young again with enough energy to tour ALL the museums in DC! On Wednesday, we caught our flights home to Nashville, arriving late that evening. 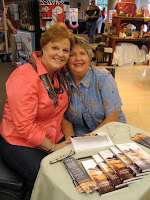 By the time I got home, I was pooped and just wanted to SLEEP. But in less than 48 hours, I was back on another plane heading to Tampa, Florida. My dear friend Teresa Nardozzi had set up a whirlwind book tour of sorts, lining me up for talks and book signings, and two TV show tapings. It was SO good to see so many friends from First Baptist Church of Indian Rocks in Largo (that's adorable Judy Gussler with me on Saturday night). And what a thrill to get to sign so many books for them! We had signings before and after four services that weekend. Charis Christian Bookstore, which is housed there in the church, hosted my signings and WOW! What an AMAZING job they did! In fact I'll be posting a separate blog about the beautiful way manager Martha Brangenberg set that all up. (Other bookstores should take lessons from her - believe me!) 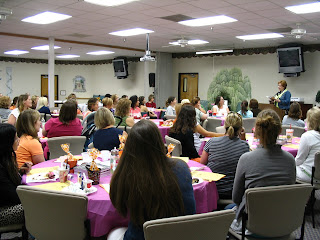 On Monday I was the guest speaker for a huge MOPS group (Mothers of Preschoolers) and loved sharing with those precious women! Then I spoke briefly to two Ladies Bible Studies on Tuesday - one in the morning, another in the evening. I can't tell you how much it refreshed my soul to reconnect with so many friends from way back when, and to see how much they're all growing in their faith! Yea God! In between those Bible studies, Teresa and I taped two shows of "Homekeepers" with Arthelene Rippey which airs on the Christian Television Network (that's Arthelene on the left below). 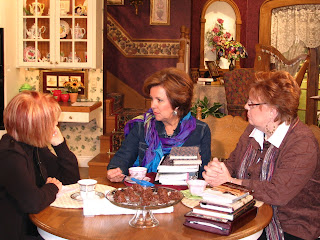 What an experience! Everything was great right up until Arthelene asked me about a term I'd made up in my book (P.A.D.D.) - and I went completely blank! (Note to self: read your book before being interviewed on air!) Thankfully Teresa came to the rescue (as she so often does!) Those shows will air this coming week - the first one on Tuesday, October 12th, and the second one on Friday, October 15th, both at 1:00 p.m. EST (noon CST). Check here to watch online at the specified times. 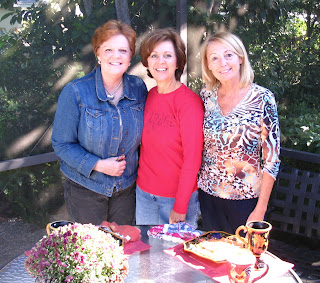 Wednesday arrived and suddenly it was time to say goodbye to Teresa and my hostess-with-the-mostest, Carol McFarland - both of whom happen to be two of our four YaYa Sistahs (we missed you, Deb!) I arrived home in Nashville that afternoon and less than 48 hours (sound familiar?) I was heading to downtown Nashville for the annual Southern Festival of Books. My publisher, Sheaf House, hosted a booth and several of our authors were on hand to hand out bookmarks, talk up our books, and BROIL in the heat!
As you can see, it's not been so much "Missing in Action" as just on the road! If you've read this far, I'm humbled! Apologies for such a long post but I wanted to catch up as well as make up for so many weeks away. Thanks for following me along my journeys . . . more to come! Now if you'll excuse me, I'm going to take a nap!
P.S. By the way, look up your local listing for Lifetime Television's The Balancing Act (I believe it airs 7 a.m. EST, 6 a.m. CST). This Thursday, October 14th, my good friends Dick & Debbie Church will be guests on the program to discuss the book I co-authored with them, Don't Ever Look Down: Surviving Cancer Together. Can't wait to see them!