At times, the process of writing and publishing books is not all that different from giving birth. And in the case of my newest novel, Of Windmills & War, I can tell you this was one big baby to deliver! But it truly was a "labor" of love and I am so pleased to tell you about it.

Most of you know my dad is a proud World War II veteran. He served as a B-17 co-pilot with the 390th Bomb Group of the Eighth Air Force, stationed in Framlingham, England. Those experiences had a tremendous impact on my father, who was only 21 years old when he flew those missions.  ﻿﻿﻿﻿


Mom and Dad attended the 390th Reunions every fall since 1984. After Mom died in 2007, my sister Morlee and I started attending these events with Dad. We've made so many good friends and always enjoy our weekends with these great men and their descendants.
﻿﻿﻿﻿

I began to notice how often these veterans spoke of Operation Chowhound. I knew it was a food drop to the people of Holland at the end of the war, but I didn't know much else about it. What piqued my interest was the fact that every time the subject came up, the men who spoke of it would choke up. Every single one of them. Why? Because for the first time, these young men were delivering life and hope instead of death and destruction. 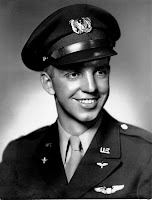 I tried to imagine what it was like for these young men to serve in the war back then. Many of them were still teenagers. Yet, day after day they flew those huge Flying Fortresses into skies swarming with enemy aircraft, dotted with deadly flak and constant anti-aircraft fire. Yet they did their jobs and through their efforts, Germany and Japan were defeated.

I also tried to imagine what it would be like growing up in a country like Holland during the German Occupation. Most of us know about the bombing and the cruelty of their occupiers, but what was it like to live in such constant fear? What was it like to be so consumed with hunger you could think of little else? And what was it like for the young men and women who committed themselves to fight for their country through the Dutch Resistance? ﻿﻿

These are the questions that began to camp out in my soul as I started writing my story. Most people have never heard of Operation Chowhound, so I consider it a huge blessing to be able to tell the story of this amazing event woven through the lives of my characters. But please don't think this story is only about the hardships of war, because it's so much more. It's part "coming of age" in the late 30s/early 40s, and part love story against the colorful, historic background of that pivotal time in the history of our country.

And check out the gorgeous cover our daughter Hannah designed! I'm absolutely in awe of how beautifully it conveys the ambiance of the story. Thanks, sweetie!

If you get a chance to read Of Windmills & War, I'd love to hear from you. And if you're looking for a great Christmas gift for someone special on your list, you can find it on Amazon HERE. The paperback version should be available in about a week or so. I would be honored to sign a gift copy for you or someone on your list!
Posted by Diane Moody at 1:21 PM 3 comments: