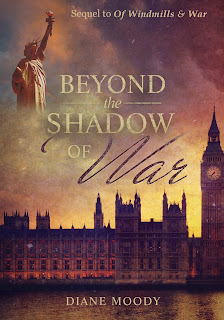 Pardon me while I dust off this lonely little blog. It’s been quite a year! But I’m so pleased to announce the release of my newest book, Beyond the Shadow of War, the sequel to Of Windmills & War. If you browse through those past three posts in my blog archives, you’ll recall that Dad and I took a trip to England in August of 2014. There we visited our new friends who still live on the land where the 390th Bomb Group was based during WWII. And while we were there, I realized Danny and Anya had many more to share, and I couldn't wait to get started.


Then life got in the way as it so often does. Alas, we’ve been racing the calendar to launch the e-book version, and today’s the day! I’d hoped we might have the paperback ready in time for Christmas, but that will be our first priority in the new year. (If you’d like to be notified when that happens, post a comment below or email me HERE.)
﻿
In the first few pages, you’ll find a personal note about our hosts in Framlingham, Steve and Lydia Kirk. What a blessing they’ve been to us! And in the back of the book, I’ve included a memorial tribute to my favorite war bride, Joan Van Spyker. She was such a tremendous help to me as I wrote about the plight of war brides, which is why I’ve dedicated my book to her memory. This one’s for you, love.


For a glimpse into the story, here’s the official book blurb. Enjoy!
When the war finally ended in May of 1945, Lieutenant Danny McClain made good on his promise to come back for Anya in Holland. He expected her to put up a fight, but instead found her exhausted and utterly broken. Maybe it was unfair, asking her to marry him when she was so vulnerable. But this much he knew: he would spend a lifetime helping to make her whole again.
The war had taken everything from Anya—her family, her friends, her home, her faith. She clung to the walls she’d fortressed around her heart, but what future did she have apart from Danny? At least she wouldn’t be alone anymore.
Or so she thought. When the American troops demobilize, Danny is sent home, forced to leave Anya behind in England. There she must wait with the other 70,000 war brides for passage to America. As England picks up the pieces of war’s debris in the months that follow, Anya shares a flat with three other war brides in London and rediscovers the healing bond of friendships.
Once again, Danny and Anya find themselves oceans apart, their marriage confined to little more than the handwritten pages of their letters while wondering if the shadow of war will ever diminish.


You can find Beyond the Shadow of War on Amazon HERE.
Merry Christmas and Happy New Year!